Not Pictured: John Basye, Jim Manwaring, George Schroeder.
(*)=did not transfer to BHS

The Contra Costa Times newspaper has a regular feature where readers submit stories about persons who have influenced their life. In April 2002 Grey Whipple submitted a piece about Jack Chappell, principal of Washington Elementary School. It was printed on May 18, 2002. It is reproduced here at the urging of classmate Mike Johnson. The photo was added as an afterthought. 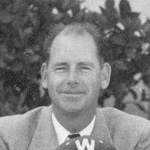 It was February 1945, the war in Europe and the Pacific still raged, but was soon to be over. I was 7 years old and in the second grade. Stepping off the train in Emeryville with my mom and brother changed my life. The family had moved to California. My dad met us in our family's 1937 Chevy , and we drove across the Bay to Burlingame to a new home and a new school.

The following Monday I was enrolled in a second-grade class at Washington Elementary School. There were tears the first day being left alone with a class of strangers, but from then on everything was a new adventure. At that time, Washington School was a K-8 and that year the school had a new Principal, Jack Chappell.

Jack Chappell was a visionary and his people skills made you want to do well in his eyes. By the time I graduated from the 8th grade, he was one my best friends. In my mind the man walked on water and could do no wrong. So what did he do right?

He knew every student's name, first and last. He personally administered spelling tests to each class several times a year, and issued a Certificate each year for those students with 100 percent performance. He instituted a policy of showing movies to bolster text book material. He created projection teams of 8th graders who took time out from their class work to set up and operate the movie projector for other classes.

Jack Chappell supported the Parent-Teacher Association. My mother was PTA president for a year. He supported a Dad's Club that raised money for school equipment. The Dads' Club started showing Saturday morning movies at the school for 9 cents-usually a western, a serial, and a cartoon. I often operated the movie projector. He supported the Cub Scouts and Boy Scouts that met at his school. He supported the paper drives that continued for a few years after the war. Jack Chappell was found on the playground after school, usually umpiring a baseball game. In the summer he would be found at the city park leading children's activities.

As an eighth-grader, I was one of the chosen few to be one of the coveted movie projector operators, and was also made chairman of the projection crews. That meant lots of special privileges, like riding my bike downtown to the post office to mail reels of film to the movie distributors. I was entrusted with school keys and the principal's petty cash.

Each school year ended with two main events, a General Assembly and graduation. At the General Assembly, awards were presented, including the 100 percent Spelling Certificates. Special letters of commendation were bestowed upon several eighth graders who had exhibited leadership and given much of their time for the greater good of the school. I had thought I was a slam-dunk for one of those letters.

Jack Chappell strode to the front of the assembly with an armful of materials to be presented. The last item of business was the letters of commendation. And when they were all presented, I was not one of them. I was crushed and tried to mask my disappointment; classmates around me were surprised, too. But that was not the end of it. Mr. Chappell reached into his inside coat pocket and pulled out one more letter, and began speaking about one person who had set himself apart from all the rest. It was presented to me. I began Washington school in tears, and ended with very watery eyes.

After I graduated from Burlingame High School my family moved south to Salinas and I lost track of Jack Chappell. But that is not the end of the story. After college and a stint in the Navy, my wife and I returned to Daly City. Some years later I heard that there was to be a retirement dinner for retiring Superintendent of Schools, Jack Chappell. I attended the sold-out event and during his remarks to the audience, he acknowledged my presence, one of his first students as Principal at Washington Elementary School.

I am grateful for Jack Chappell and the difference he made in my life. This world needs more giants like him.

CHAPPELL, Jack Roy - Born October 9, 1913 in Elgin, OR, passed away in San Francisco, CA on September 24, 2003. Husband of 59 years to the late Janice McKenzie Chappell, he leaves behind son and daughter-in-law Donald and Grace Chappell, of San Francisco; grandchildren Alexandra Chappell of San Francisco, and Andrew Chappell of Miami Beach, and sisters Barbara Ross and Marge Fellows. Descended from the Rineharts, a pioneer family that settled in eastern Oregon in the 1850s, Jack came to California as a child in the 1920s, grew up in Mountain View and attended Mountain View High School, San Jose State and Stanford University. Jack and his family lived in Burlingame from 1944 to1978 where be was principal of Washington School and later Superintendent of Schools. Besides his dedication to good teaching, in which practicality, imagination and cheerfulness played large parts, Jack designed and mentored countless after-school programs for Burlingame children, which included team sports, tutoring, and gymnastics as well as Saturday morning movie programs. After his retirement in 1974 Jack and Janice moved to The Villages in San Jose. He most enjoyed traveling, ballroom dancing and playing golf with friends. He was a consummate card player, always keeping his eye on the winning hand (usually his!) while never losing his calm and friendly demeanor. In their early years he taught his grandchildren the fine points of poker and Yahtzee and the even finer point of never being a sore loser. The family will hold a private memorial. NEPTUNE SOCIETY 415-771-0717

Thanks to the Burlingame Historical Society for noting his passing in the November 2003 issue of THE RECORD. Thanks also to Fiona Hamilton (principal archivist) and Steve Hamilton (webmaster) for providing images and Internet links. The text above is from the SF Chronicle website.