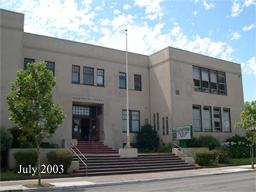 The book Burlingame: City of Trees is an excellent history resource for the Burlingame schools, past and present.

Coolidge School closed in 1972. And later that decade, Pershing, Hoover, and Roosevelt were closed due to declining enrollment. Both Coolidge and Pershing were eventually demolished. But Hoover was sold for offices, and in 1997 Roosevelt, newly renovated, was reopened.

Pershing Elementary School
Click here to view a list of where your classmates attended 8th grade in Burlingame
(if you know the answers to any of the blanks, please send us a note)
| home |